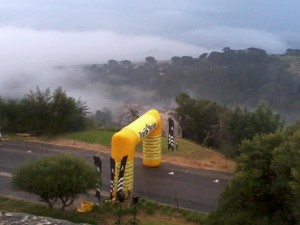 It’s never nice driving to a race in the pouring rain, as you begin to question your sanity, but it began to ease as we drove towards Paarl and we emerged from the mist as we reached the Taal monument. So I was feeling optimistic that the rain had passed and we would be fine during the race. However, as we sat in the car, keeping warm and getting prepared for the race, the heavens opened again! Were we mad to be running in this weather?! Surely it couldnt rain for the whole race but I suppose at least it would be refreshing??! I made a mad dash from the car up to the start area, via the toilet!, and huddled under the trees.
After a very brief warm up, before I knew it the race had begun and amazingly the rain had stopped. The 15km route was mainly on gravel track and not too technical. We had been warned before the start of the race that it was quite slippery in places and true enough there were places where it was like running on ice. I felt like I was in Scotland!
It was quite a steep uphill to start. Landi and Marie were already ahead of me but I didnt want to worry about them I was more concerned about staying on my feet! And I also wanted to make sure I enjoyed the race. Jacoline and another girl passed me on the initial climb but I had soon passed the girl once the track levelled out.
Once we’d reached the top of the wooden stairs by the rock (about 5km) there was a lovely decent and by now the runners had spread out. Gorrilla’s in the Mist sprang to mind as we continued along the muddy gravel track.
I was still lying in 3rd place in the open (4th overall) as we looped around the dam, and I knew I just needed to maintain my pace as there was quite a distance between me and the girl behind. My legs felt a bit sore on the climbs but on the flat and downhills I could stretch out my legs, although I did keep my handbrake on a little as I didnt want to slip and fall and I knew I couldnt catch the two infront.
I was pleased to finish in 3rd place and I made sure I quickly got to the car and changed out of my damp clothes so I didnt catch a chill. And my 32Gi chocolate recovery drink was quickly consumed!
I’m looking forward to the final race of the series at Kleinmond which is on Saturday 18th. I’m lying in 4th place in the championship. 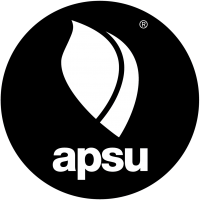 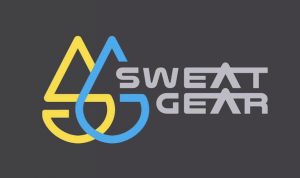 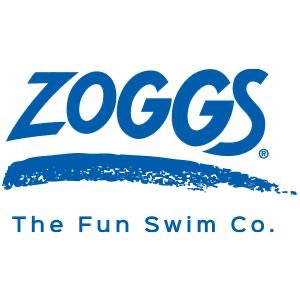 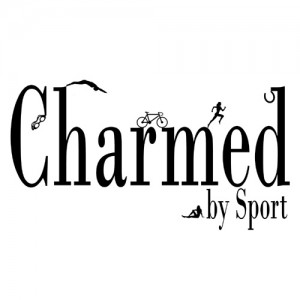